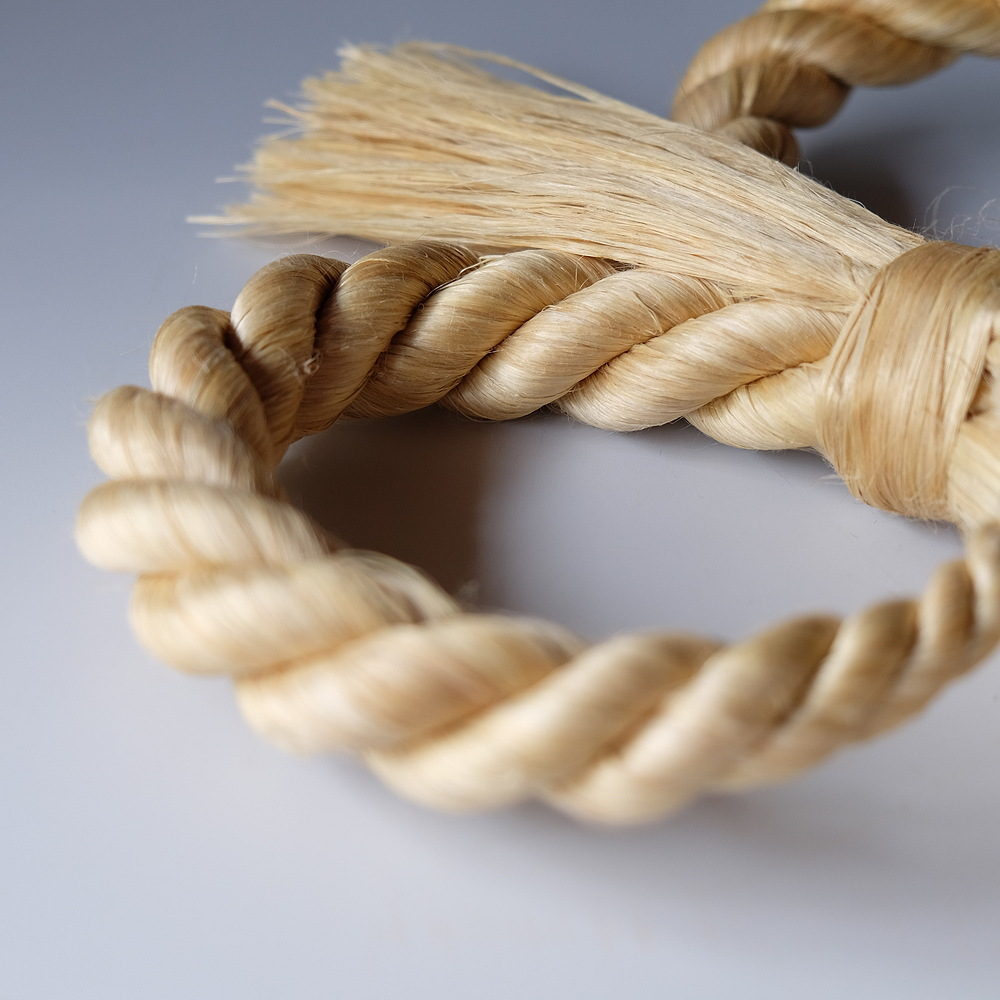 #001 “SPECTACLES”  W260×H360mm
The “spectacles” (megane) are a relatively new motif. They promise a glimpse of a hopefully bright New Year. This shimekazari is a very beautiful and sculptural artefact, which you can enjoy also as a pure objet d’art.

Shimekazari is the name for the traditional Japanese New Year decoration that one often sees at the entrance to company buildings, restaurants, and private homes during the New Year season. Now this decoration is often made of rice straw or similar materials. In former times it was traditionally made of hemp. 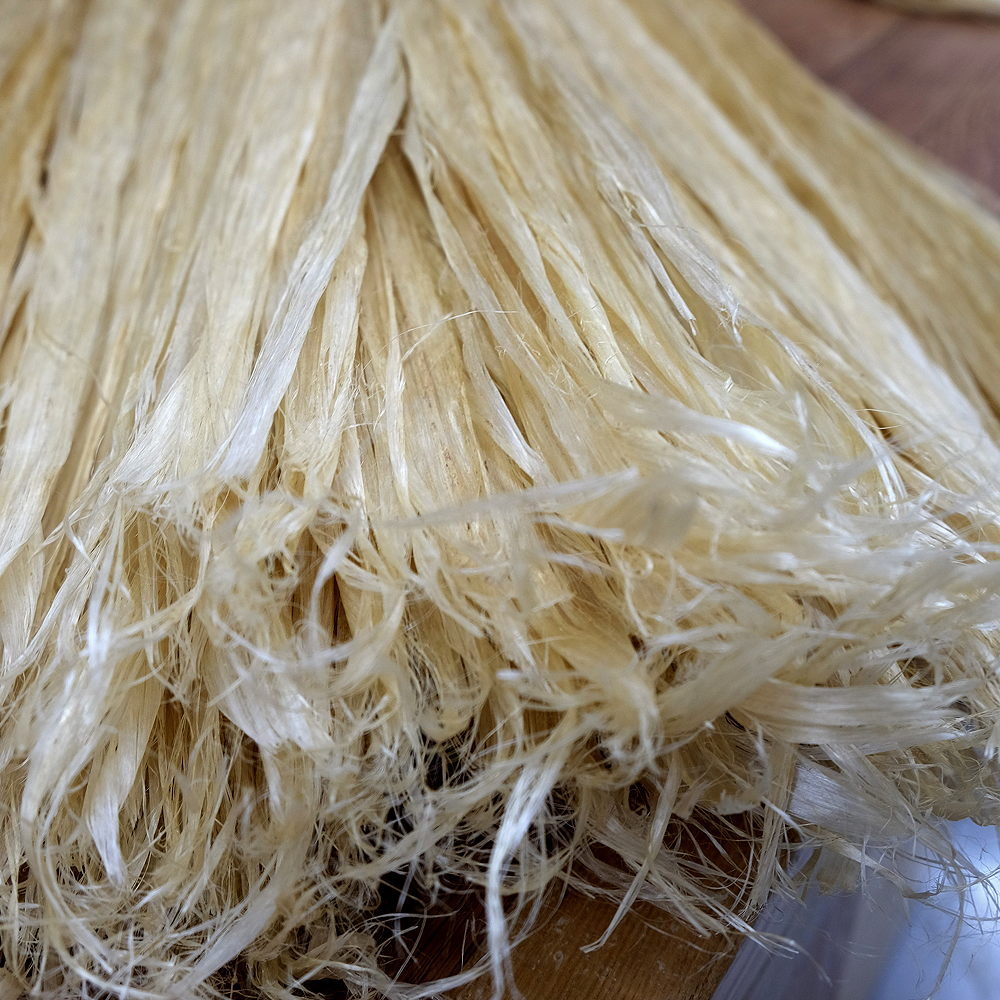 From ancient times hemp has been deeply rooted in the lives of Japanese people. Already starting in the prehistoric Jomon period, hemp was used to produce ropes, clothes, baskets, fishing and mosquito nets. Due to its bright colour and its lustrous look, hemp has also become a symbol of purity. In this purifying function it is widely used for costumes, offerings, and ritual tools in Shinto shrines. 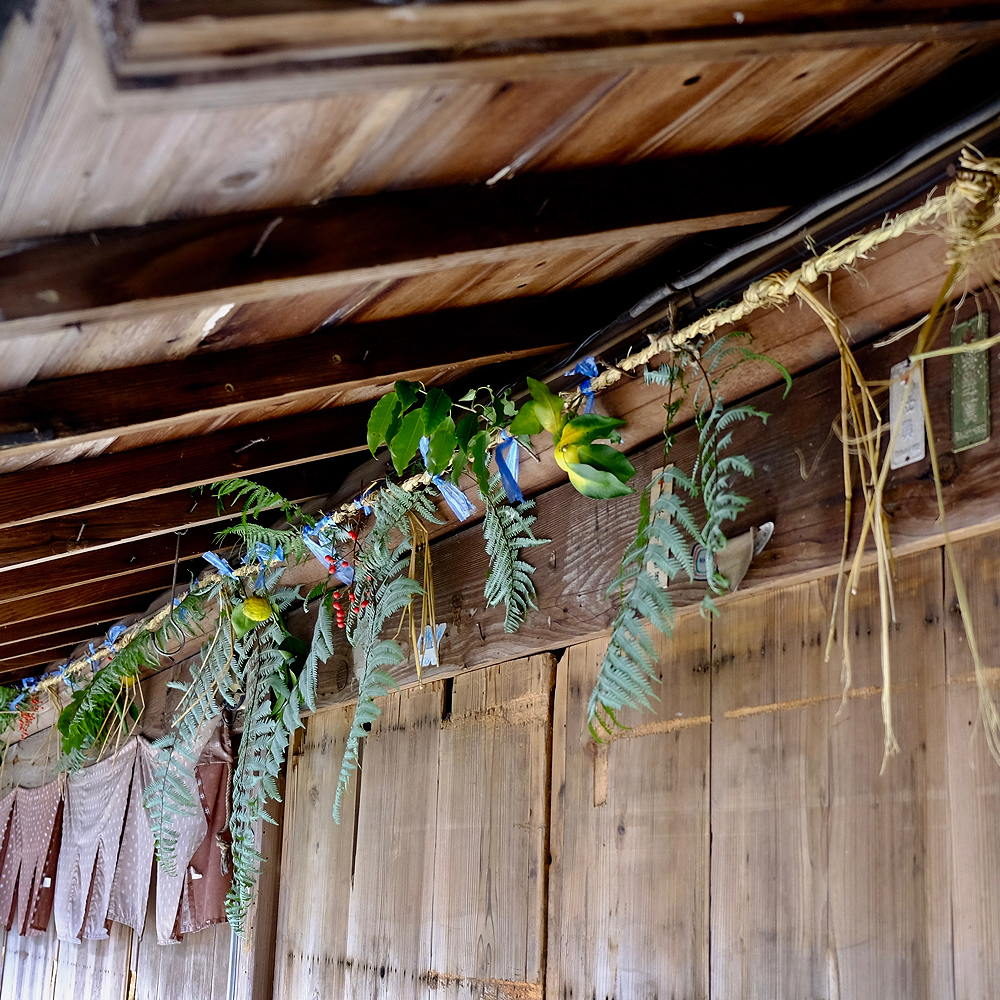 Among the oldest and most basic Shinto ritual tools are shimenawa ropes, made from hemp of different diameters and lengths. Shimenawa ropes are used to mark the boundaries between a sacred, pure space and the daily profane living areas. At the same time they act as protection against malign influences and evil spirits. In this function shimenawa ropes are used to attract and invite gods and good spirits to live and dwell in the sacred places, which are defined, encircled, and protected by these hemp ropes. The New Year shimekazari decoration is thought to have its origin in this use of shimenawa ropes in Shinto shrines. 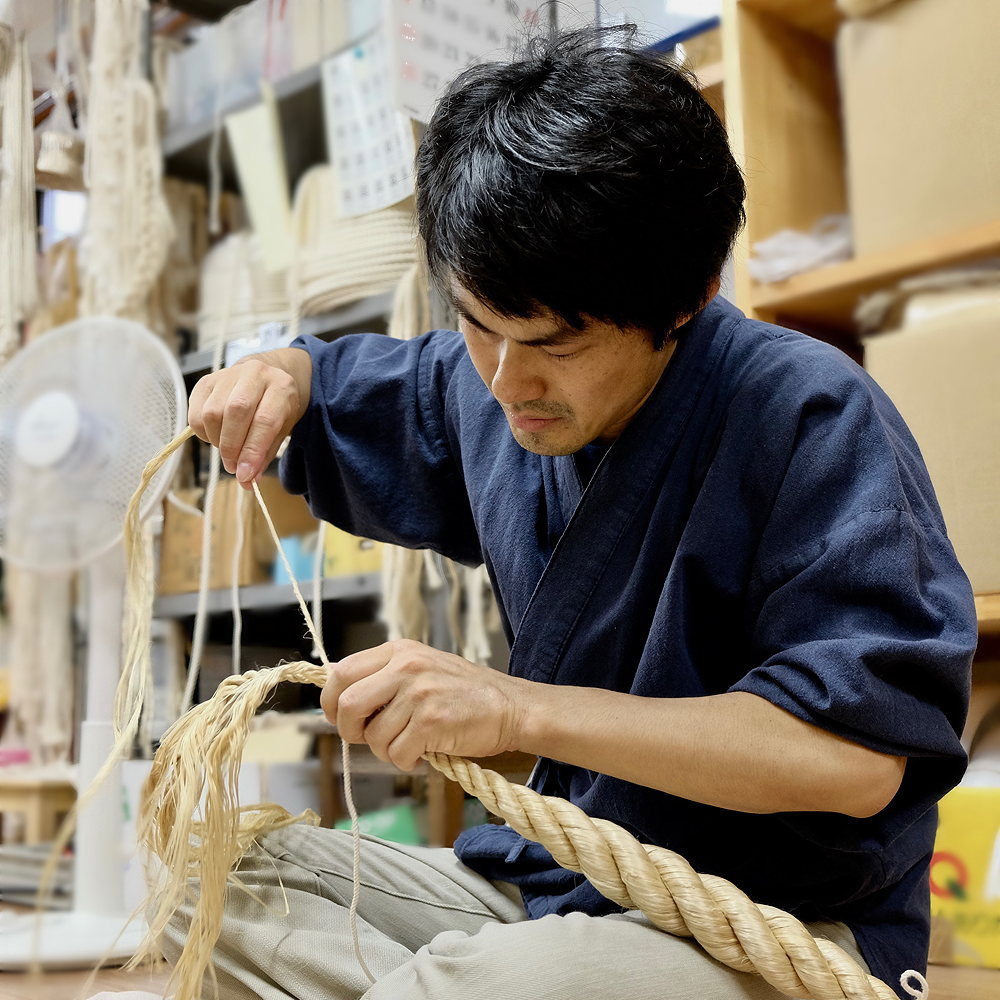 Since we moved our gallery to Kyoto, we have been looking for a kind of shimekazari that stays honest to its traditional origins and at the same time fits our contemporary life and modern aesthetic sensibility. It was Masahiko Yamakawa who helped us to make this happen. Now in their fifth generation of production, the Yamakawa family specializes in twisting and twining hemp fibers into shimenawa ropes for ritual use. Theirs is among the last workshops in Japan to produce handmade shimenawa ropes from hemp for the shrines and temples of Japan, including the most important Ise Jingu shrine. Thanks to Yamakawa’s skillful hands we are able to present you this year our original shimekazari. Each piece is twined, twisted, and bound by hand using the best quality Japanese-grown hemp. 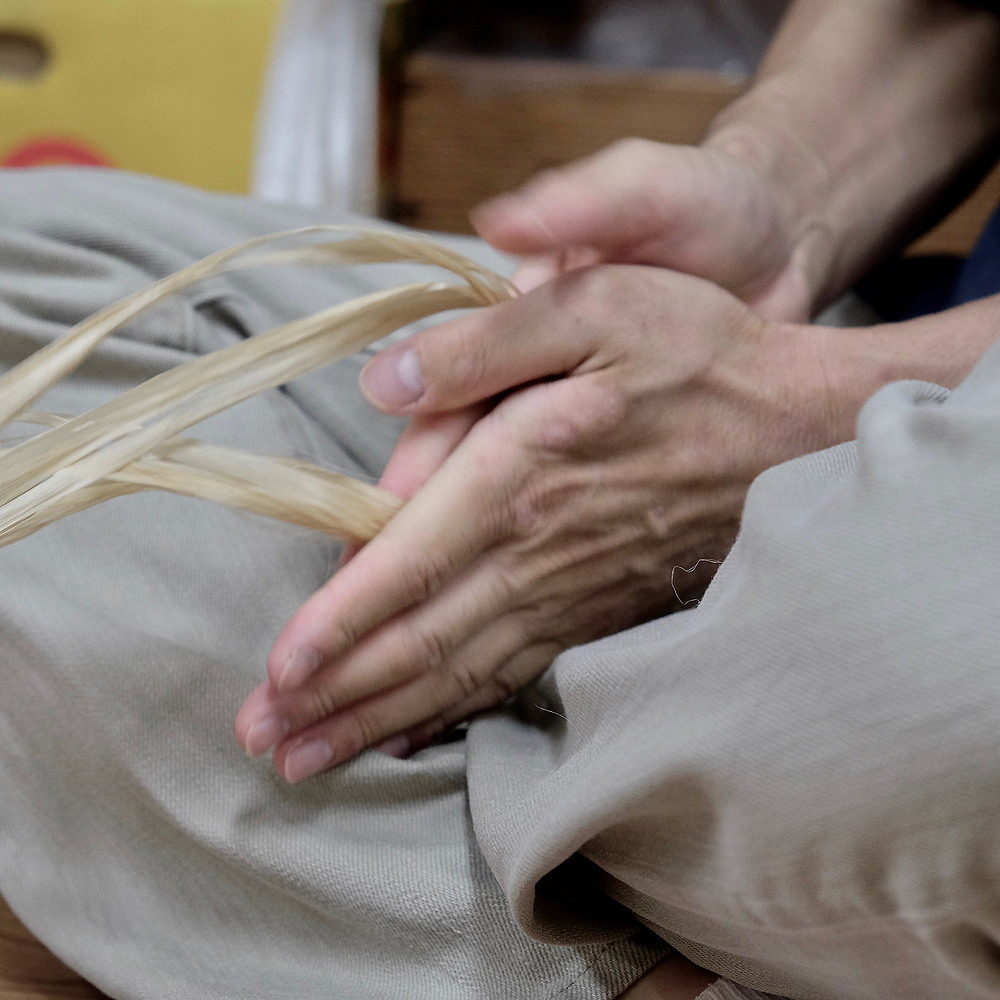 We studied a wide range of different shimekazari decorations, used traditionally in different regions of Japan. In the end we chose five motifs. We made only minor changes to proportion and size. We recommend that the decorations be used without any additional decor. The supple tension and strength of the twisted and twined fibers and the natural brightness and brilliance of the raw hemp speak for themselves. 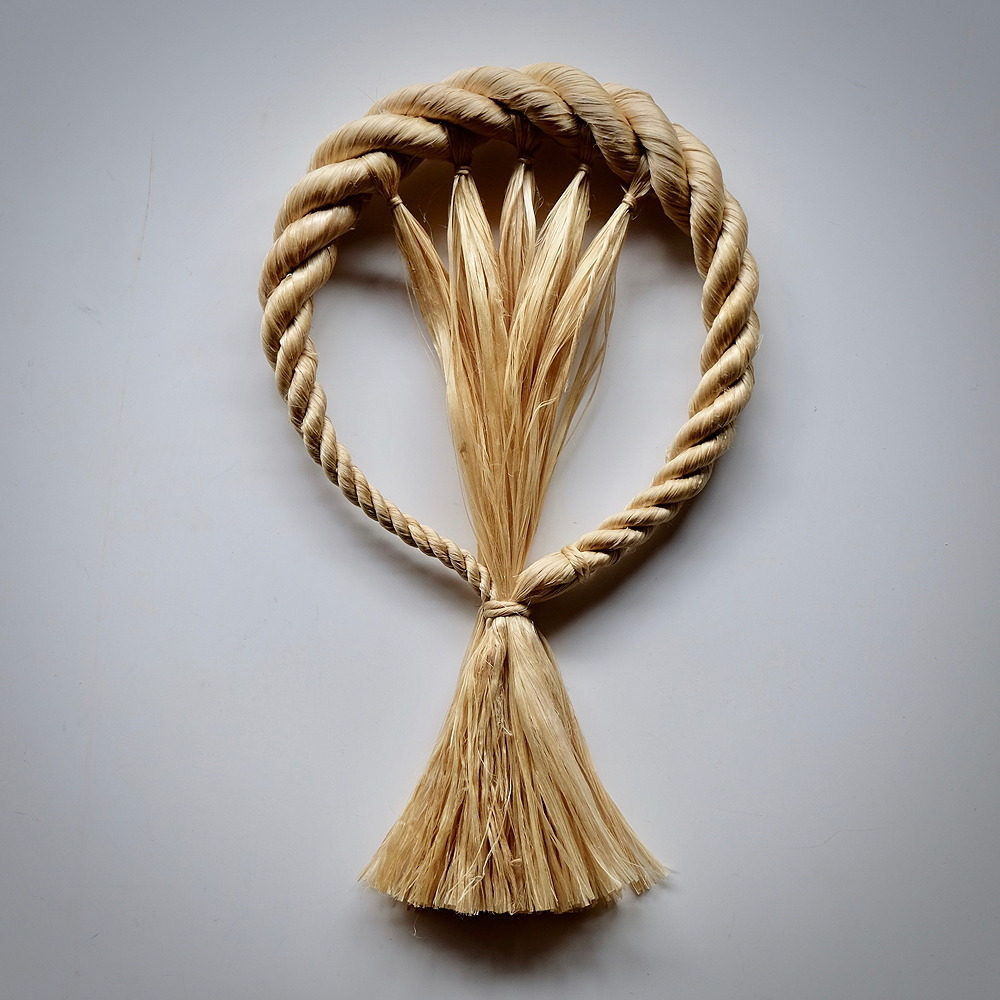 #002  “LADLE”  W190×H330
This shimekazari is in the shape of a ladle (shakushi or shamoji): it should help you achieve really big portions of happiness in the New Year. Traditionally the decoration was used to protect people and places involved in the food business. It was used as a prayer for a safely gathered and rich harvest in the coming year. 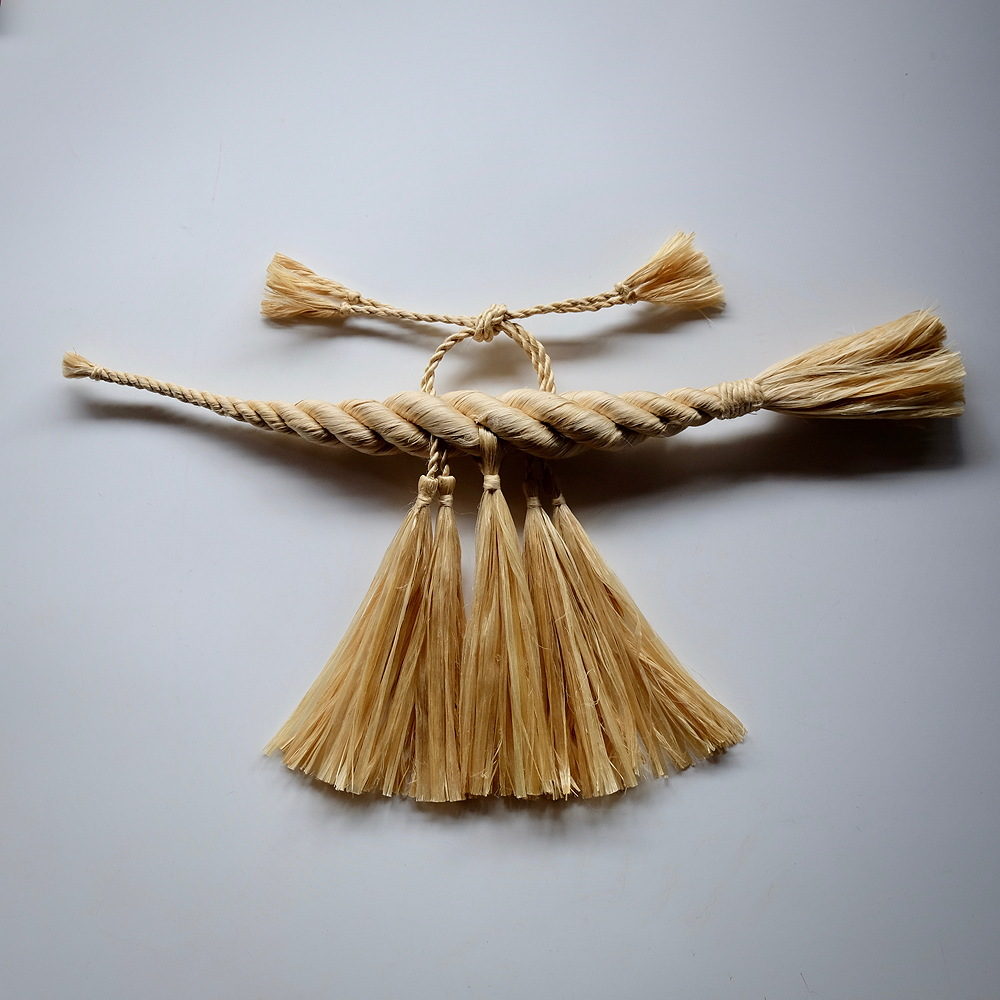 #003  “SHRIMP”  W620×H320
This shimekazari is in the shape of a shrimp (ebi). The large horizontal rope shows the body, the hanging fibers its legs. After cooking the shrimps are red, and red is the colour that protects against all kinds of evil. This shimekazari stands for longevity and a fulfilling marriage. 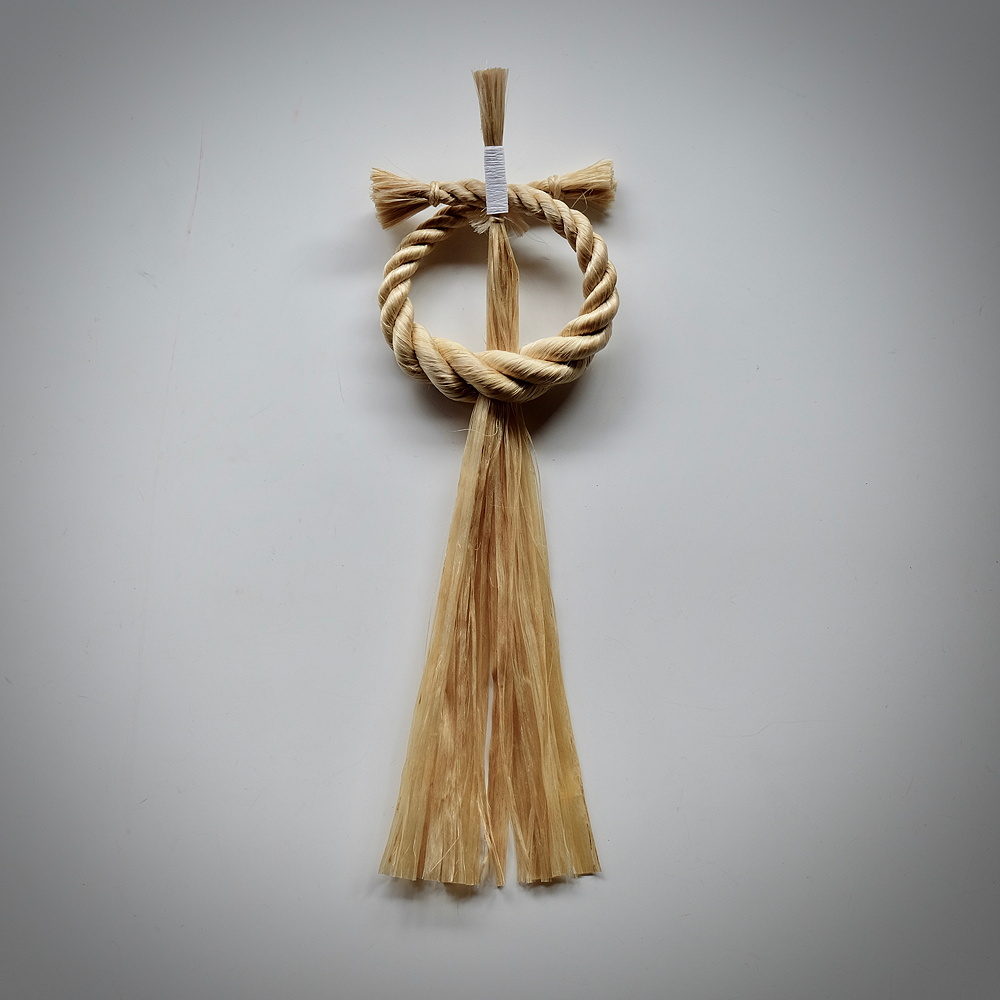 #004  “BALL”  W120×H370
The round circle symbolizes a perfectly round ball or sphere (tama). It symbolizes the wish for a perfectly “rounded” and fulfilling New Year. This shimekazari is the smallest of our five. It is appropriate for the entrances of apartments. 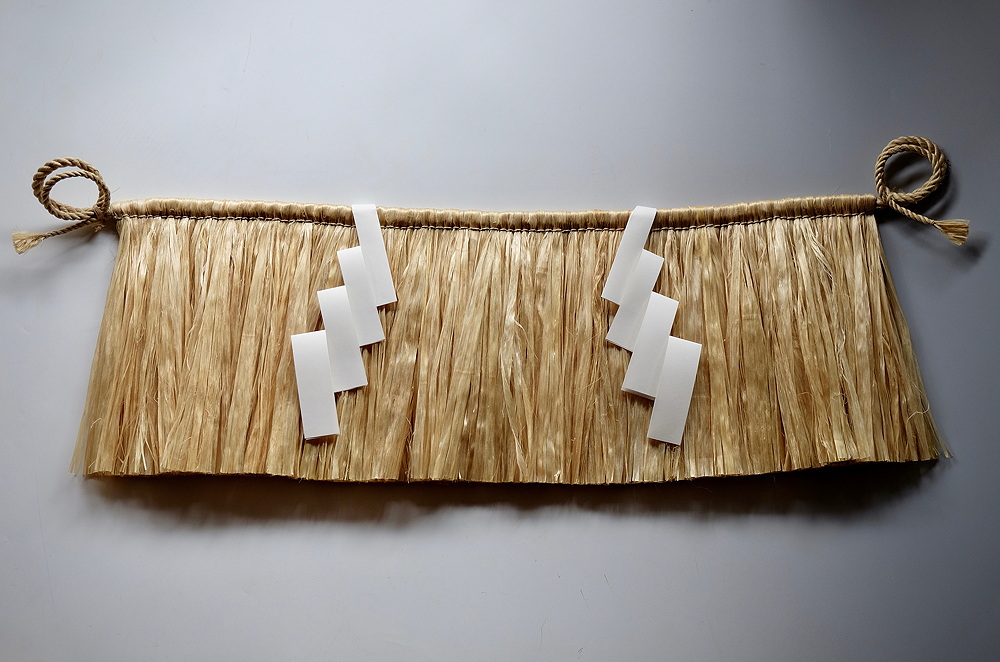 #005  “RAIN AND THUNDERBOLT”  W900×H300
This shimekazari with its several layers of hanging hemp fibers is a true masterpiece. It evokes life-giving rain pouring down from heaven, with thunder and lightning, a truly numinous scenery. Among all the designs of shimekazari that have been passed down to us, this is the one we feel is the most simple, yet refined at the same time.

All SHIMEKAZARI decorations shown in this newsletter can be ordered by phone or e-mail. We can ship overseas. Please understand that we can produce only a limited number of each motif.
☎︎＋81-75-254-7533
10:00 – 18:00 closed on Tuesday